One of the brighter aspects of this week, and let's face it there haven't been many, has been the paediatric oncologist at Epsom Hospital also being the duty consultant up on the ward. The situation is not altogether straightforward, with Adam being in Epsom under their shared care arrangement with the Royal Marsden, who are looking after Adam whilst he's a patient of Helen De Vos Children's Hospital in Michigan, USA, participating in a Phase I NMTRC clinical trial. But things have worked out ok, the communication has been good. We've listened and been listened to, and we've made collective decisions we all understand and are (albeit perhaps to greater or lesser extents) comfortable with.

There has been no further investigations, no x-rays or ultrasounds or CT scans. The spike in temperature yesterday has been noted, but put in context that it wasn't repeated and Adam's charts clearly demonstrate the dampening that has taken place. Although his temperatures are still above where they would normally be, there are no longer the clear peaks and troughs of earlier in the week.

Adam reaffirmed his desire to go home, to spend some time with Jake and Jess. In the context of where things are at, what we are planning, what we face, such desires cannot be ignored. So we talked it through with the consultant here, who in turn talked it through with Adam's consultant at the Royal Marsden, and they agreed he could spend a few hours at home after his antibiotics at 2pm.

We were not sure how Adam would be at home; I mean he clearly isn't well. The first thing he did, which seemed a little odd to me, was to go upstairs and climb up on to his cabin bed. There we thought he might decide to stay until we took him back to the hospital. But instead he came downstairs, played a couple of board games (at his own request), and ate the best meal he's had all week. We returned to hospital around half-past eight so Adam could settle down for the night. Our hope is that we'll be able to have a repeat tomorrow, but maybe get them to bring the antibiotics forward a little as well so we can get away sooner. I might be in danger of getting ahead of myself though, so I'll stop there. 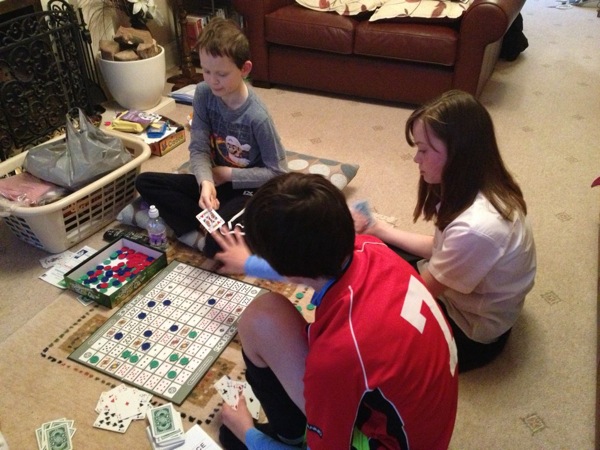 Reflecting a little on this past week, it is now the longest Adam has been hospital with fevers since he was first diagnosed. I suppose that's something, isn't it? No, you're right. It's not really, it's totally irrelevant.