We've had a really good week since returning from Germany. Adam continues to be well; his eating is good, he is sleeping well, and he's started to recover some of the strength he lost during and after the first round of antibodies. We weaned him off the Gabapentin without any noticeable effect. He also carried on taking Lansoprazole (proton-pump inhibitor) whilst still connected to the portable antibody pump, but that's stopped now too. On Thursday he went up to the Royal Marsden to have his pump disconnected, and theoretically have bloods taken to be sent to Germany for testing. It turns out there's been a lack of communication back from the hospital in Greifswald about how they want the blood spun/stored/shipped, so Adam's samples from cycle one are still in the freezer over here. Consequently on Thursday we had standard blood counts done, but nothing else. We are also supposed to have bloods taken, and samples sent, today and next Monday. However, until they get things sorted out there's really no point, so we've had an unexpected day off. It doesn't affect Adam's treatment in any way, though I suppose it may not please the doctors in Germany. Not our fault though, we only found out about the problem incidentally on Thursday. The less time Adam has to spend at the hospital the better as far as we're concerned.

Adam had a visit from his little cousins Eva and Samuel over the weekend. Obviously we don't get to devote a lot of time to social activities these days (for starters we are only at home for two weekends out of every five). We've only been to visit family ourselves once (because we have no family members living nearby) since Adam was diagnosed. So it was nice for my sister and her family to come down at short notice to see us all. It was the first 'normal' weekend we've had in what seems like ages. I took Jake to the England T20 cricket match on Friday evening, and on Sunday we all went to watch Jake play football - the first game of this season that we've been able to go to. My parents also returned home yesterday, after their extended stay in Surrey. Dad did as he was told and took things easy, his nose behaved itself, and thankfully there was no re-return to hospital. Hopefully, that's the end of it now, although I'm not sure how long he's restricted to only cold food and drink!

Adam started his fifth cycle of 13-cis-RA this morning, he finishes the fourteen day course on Sunday before we start the third cycle of immunotherapy. He is re-scanned after round three. We've agreed to do MIBG in the Marsden at the end of October, then MRI and bone marrow tests in Germany when we return for the fourth cycle.

Moving on to the big news of the day ... Adam went to Junior School for the first time this morning. Only for a couple of hours to ease him back in gently, but everything was fine. Term, of course, started whilst he was out having treatment in Germany, but Adam is a veteran at missing school so it mattered not. As long as he is well enough the plan is for him to go to school for the next couple of weeks until we start back out for Germany, albeit he won't be doing full days. This time five weeks ago, after the first cycle of immunotherapy, he had just been diagnosed with pneumonia. So I think we can call that progress.

Here are a couple of photos from this morning that will be going in the family album.

All ready to head off for his first day ... 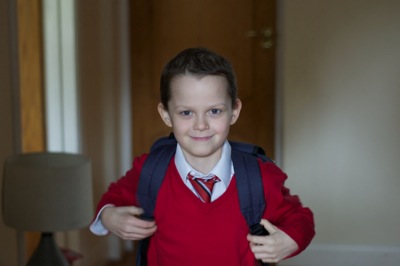 And after he got back home, wasting no time in dispensing with the services of his school tie ... 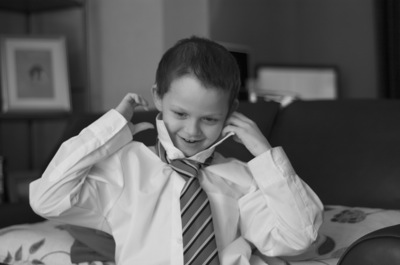 Although Adam's Appeal has nothing like the impetus that it did in the first half of last year we are still actively raising money so Neuroblastoma Alliance UK can support children, including Adam, to access treatments for neuroblastoma outside of the NHS. At the moment the charity are covering treatment and incidental costs relating to Adam's immunotherapy treatment in Germany. We are still actively seeking to recoup these from NHS Surrey and/or Department Of Health as per last year's parliamentary debate, but I have nothing new to report on that front yet. As I've said before, it's very likely that we will take Adam elsewhere for more treatment once we're done in Germany.

And so to a few thank yous that are in order to finish off this post ...

John & Emile, both members of the British Armed Forces, who ran back-to-back marathons non-stop through the night from Pirbright (where they are both based) to Southsea Pier.

Kevin Bates from my hometown in Norfolk (even though he didn't know it until recently!) who rode from Land's End to John O'Groats, almost entirely in the wind and rain.

Thank you all for supporting Adam's Appeal.

P.S. Now that 2Simple Trust has transitioned into Neuroblastoma Alliance UK, we have a new team page on Just Giving. If anybody is interested in raising money for NB Alliance UK in the future, please check us out at http://www.justgiving.com/teams/adamb.