Nothing much to report ...

All quiet on the Adamski front. Nothing much to report. He went into school for a couple of hours everyday last week, and the plan is for him to do the same this. He stayed for lunch a couple of days but the weather has been too hot for him - I wouldn't have believed I would be saying that heading out of September and into October. He feels the heat and with the 13-cis-RA he's taking his skin is very sensitive, and burns easily. So after spending one particular lunch break sitting in the shade, away from his friends who were playing football, he decided he might as well come home at the start of lunchtime rather than the end.

Last Tuesday Alison picked him up out of school and the two of them went to Chessington for a few hours. This term was always going to be a write-off academically, so any time he does spend at school maintaining the social contact and getting to know the staff is a bonus. I don't think many people would begrudge him swapping his classroom for the skyride and bubble-works for a couple of hours, given everything else he has to contend with.

We went to the caravan over the weekend. Last time we were there after cycle one we were taking Adam around in his pushchair, when he wasn't lying prone on the sofa. He did get out and walk one time when we went down to the seafront; he managed about twenty yards before he was wiped out. This time round he was out on his cycle, and getting back towards where he was before we started out on this German adventure of ours.

Having heard nothing from the Marsden about the repeat testing of Adam's blood requested by Germany we assumed they haven't heard anything further from the doctors in Greifswald. Consequently we didn't bother taking Adam up to the hospital again today, which nobody here was complaining about. We'll be keeping quiet whilst we're out there as well; if it means two fewer visits to the hospital each time I'm only to happy to play dumb (for once!).

We head back out on Saturday to begin road-trip number three. After the problems with the Elternhaus on our last visit we have a rental house to stay in this time round. It's more expensive, but it's so much better for Adam than if we were to end up in a hotel or guesthouse. Ironically we were told on Friday that there would be a room at the Elternhaus for us this time round for the full two weeks. The problem is, if we pulled out of the house rental now we couldn't expect them to engage with us in the future, and there is only a limited amount of private short-term rental accommodation available in the area. Ryan's parents, who started round three this week, also booked an apartment after seeing the trouble we had. They were very glad they did as there wouldn't have been a room for them at the Elternhaus. So we know there may not be rooms for rounds four and five, and we need that certainty. We got lucky last time, we're not prepared to take that chance again in future if we can avoid it.

Before I sign-off here is a photo of Adam off out on his bike on Saturday ... 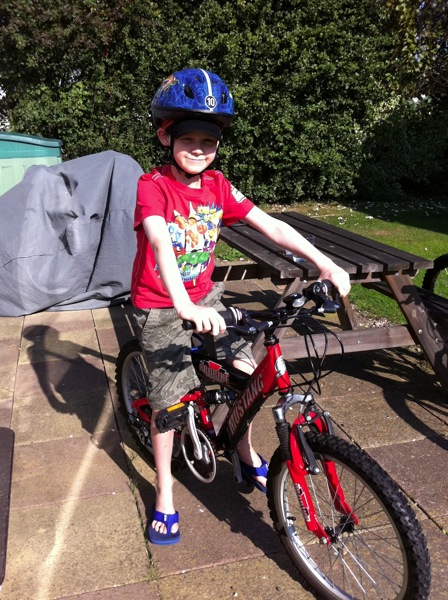