It’s Sunday morning. Adam is lying in bed playing his Nintendo and watching some American trash on his laptop. But he’s doing well. Yesterday around one thirty his antibody syringe emptied, and a couple of hours later after the remaining couple of millilitres in his line had been flushed through he was disconnected. The portable pump went on and Adam got a new black over-the-shoulder bag to carry around with him. Much better than the one he had last time – it’s all in the strap.

I spent last night at the hotel across the road – special rate on their last single room due to a late cancellation. Same again tonight. I would have no hesitation sleeping in the van again, but we want to get things packed up so that we are away as soon as possible on Monday morning. One of the nurses did say I could sleep here in the hospital, but by that time it was too late. All of the nurses are nice, but some are even nicer. This one had me in stitches when I told her I was staying at the hotel. “Bullshit” she said emphatically.

Shortly after being free of his pump stand Adam got dressed and we all took a walk to the hotel so I could check in. This is the same child who wouldn’t/couldn’t walk as far as the playroom at this (or any other) point during the first round, who had to be transferred to the van in a wheelchair to start the journey home, and who had to be carried to and from the hotel and toilet stops during the eight hundred mile trip back. He even tried to race me back through the hotel to the children’s oncology ward. A sprint down the corridor and one flight of stairs was pushing it a little too far though, and he had to stop for a drink. 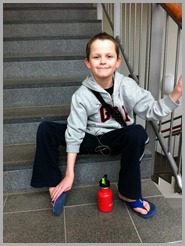 The pump will stay on until Thursday when Adam goes up to the Marsden to have it disconnected. He is still taking gabapentin, as he needs to be weaned off it slowly over three or four days.

I’m not getting too carried away, following the first cycle our biggest problems came during the second week after we got home. However, he is in a totally different place this time round as we approach discharge. Had we still got a room at the parents house for the the weekend he would have been out of the hospital yesterday; Alison and Adam are only here because of their very competitive bed and breakfast rates and cooking facilities. Monday morning we’ll have final bloods taken, collect his discharge letter, and then we should be off.

After the first round I honestly couldn’t imagine completing all five cycles of this treatment, in my head I’d already thought that we’d maybe do three and then drop out. Now I’m not saying that I can’t wait to get back out here for round three. It’s the biggest, most complete and utter, pain in the arse that our country still cannot provide this treatment despite working on getting it setup since March of last year. However, I don’t think we’ll be coming out again next time with quite the same trepidation that we did this. Just so long as Adam doesn’t go home and contract pneumonia again, or some other nasty infection we’ll be fine.

Our plan is to get a rental apartment/house for the next round. The pressure on rooms at the parents house is simply too great. There is no doubt it’s the best place to stay in terms of facilities, cost, and the social aspect of being with other families. But with a number of long term occupants we can’t wait until a few days before we are due to come out in order to find out whether or not we have a room. It’ll be more expensive and less convenient to get a place on our own, and no doubt now we’ve made this decision we’ll come out and find there are vacant rooms at the Elternhaus. However, we need to have certainty that we can come out and have somewhere to stay that provides us what we need. So that’s what we’ll do …

All things being well the next update will be posted from (sunny?) England. Yeah!