... I can honestly say I've had numerous nights sleeping in hospital beds that have been worse than the one I had last night - in the car park. That said the doctor who came in this morning to do Adam's injection did burst my bubble slightly by asking me if I'd slept well, as I looked rather tired around the eyes. And he didn't even know I'd spent the night in my sleeping bag in the back of the van! Adam chalked up one for Family Bird in return by telling him he wanted Dr Lange to do the injection instead - because he was the best. Or rather "Doctour LonGa" as Adam calls him, over-emphasising the 'G' and speaking in the deepest voice he can muster. "Hello Doctour LonGa." is how Adam always greets him now.

Anyway on to much more important matters. The contrast (thus far) in Adam between this cycle and the first could hardly be greater. The difference drugs-wise, of course, is that we're using gabapentin/neurontin instead of morphine for pain relief. Without wishing to jump ahead of myself and tempt fate he has had zero pain (still), but has also eaten well, slept soundly, and been alert and functioning normally during the daytime. The only noticeable effect has been a bout of verbal diarrhoea during the latter part of yesterday afternoon; he couldn't stop talking, and at one point even started jabbering on in some childish baby voice that isn't normally like him. Save for a couple of raised temperatures that have been easily controlled with paracetamol there is nothing else to report.

This morning when I entered the room just before 8am (to shower and change) Adam announced that he had something to show me. Ladies and gentlemen, I present to you Exhibit A, produced in one continuous flow shortly before 7am ... 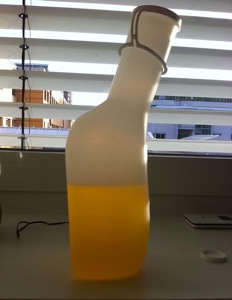 ... no bladder control issues then. [It's 660ml in case you were straining to try and read the scale on the bottle!]

When being admitted to start antibodies yesterday we were a little unfortunate that we didn't get into our room until gone 4 o'clock, as it was being used to administer treatment to two day patients. On the upside it meant we were allocated one of the transplant rooms, which are extremely spacious (although only one parent is permitted to stay still). Ryan and Alexander had both completed their cycles, so were at the hospital to have bloods done and pick up discharge letters. Ryan's family weren't flying back until later in the day so he and Adam had plenty of time to play. Watching the two of them getting on so well together has certainly been a massive positive during this round. In the end it probably turned out quite well that we moved into our room around the same time Ryan's family had to leave for the airport, it provided a natural break for the boys. If Adam remains well in himself this week he's certainly going to miss having Ryan around, as there isn't anybody else for Adam to play with. Mum and Dad are poor substitutes I'm afraid. I'm sure he'll revert to hospital-type and watch his laptop most of the time instead.

As we come towards the end of Tuesday this is what Adam has eaten today; porridge with nuts, banana and grapes; poached eggs with toast, tomatoes, cucumber, and red pepper; roast chicken with yorkshire pudding, boiled potatoes and vegetables; and two bananas 'for pudding'. During the same period in the first cycle he stayed awake long enough to eat some breakfast, but the rest of the time he just slept a morphine-induced sleep.

Returning finally to the ongoing saga of my sleeping arrangements I was asked earlier today where I slept last night - word had obviously got round.

It transpired that somebody has gone home today, so there is now a room free at the Elternhaus until Saturday. So the van won't be required for the next four nights at least. No more curious looks as I draw back the curtains first thing in the morning just as the car park is filling up with people heading into the hospital ...