Adam’s blood counts finally hit rock bottom. Whilst his HB remains artificially elevated due to the earlier blood transfusion, his platelets this morning sat at a lowly 4, and his Neutrophils at a big fat zero. The burning in his throat and pain when he swallows is now extremely severe and debilitating. His temperature fluctuated overnight, but this morning peaked at 38.4 – above the magic number at which they routinely begin antibiotics and take blood to be cultured for possible bacterial infections.

At the moment the mild fever hovering around 38 to 38.5 is consistent with his neutropenia (zero neutrophils equals zero immune system) and it wouldn’t surprise me to find that in 48-hours his cultures come back negative (it takes that long for the blood to be plated and start to grow any bugs). If his temperature spikes higher still i.e. above 39.0, or he becomes otherwise symptomatic, then I would suspect he’d picked up an infection.

He is still not eating, and is generally extremely tired and irritable. Having slept for 3 hours during the afternoon yesterday he proceeded to stay awake long past any reasonable bedtime for a seven year old. Another consequence of the afternoon ‘nap’ was a lack of oral fluid intake that led to him being put back on IV fluids. Given how difficult it was to get him to drink enough water that’s not an altogether bad thing.

Tomorrow it will be a week since the first batch of Adam’s stem cells were returned to him. We just have to wait this period out until those cells start to engraft and grow new bone marrow. In the meantime all we can do is manage the situation as best we can, hope there are no more nasty surprises, and keep our fingers crossed that he turns the corner sooner rather than later.

He may be feeling rotten, but the little fellow is still able to muster a smile for us every now and again … this photo was taken earlier this morning. 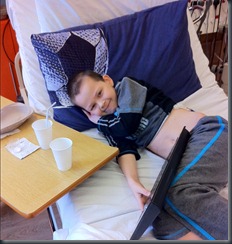