Today Adam woke up with a lovely spotty red rash covering his face and torso. So far it's not bothered him greatly, except for the fact that he knows it's there. He's already had to get a mirror and have a good look at himself several times. In the first instance they are viewing it as some sort of reaction, and are proposing to treat it accordingly. It's not itching and he doesn't have any fever to go with it.

His blood cultures have also come back positive for streptococcus bacterial infection, so he'll need to complete a full course of antibiotics.

Last night I got a flashlight and examined the inside Adam's mouth. It's as though somebody has extinguished a couple of cigarette butts on the roof of his mouth, either side of the entrance to his throat. Literally red raw and burnt right through. No wonder the poor little chap finds it nigh impossible to swallow anything at the moment; other than water it brings forth a horribly pained expression as he forces it down. Even the codeine he's been taking for pain relief has had only a very limited effect.

That said, he was generally better in himself yesterday than he had been the day before. His temperature was lower and he was more communicative, at one point even getting some toys out on his bed to play with. He still had his tired spells and a couple more 'accidents' but it was a definite improvement from Sunday. 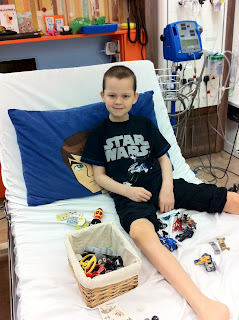 We shall see what the remainder of today brings...
Posted by birdni at 14:45