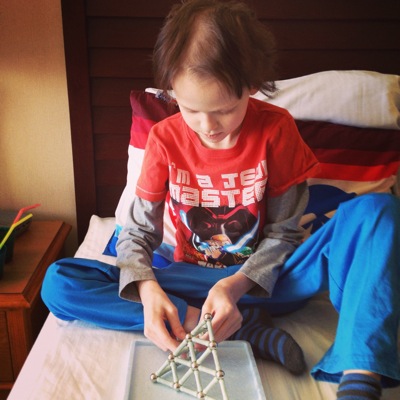 Quite remarkably, given that Adam developed a potentially life-threatening infection on our first day in Grand Rapids, we are just finishing week one of his new treatment combination on the molecular-guided therapy trial that we've enrolled him on. Clearly we could have done without Klebsiella Pneumoniae rearing it's big, fat, ugly, head but to think we haven't lost a single day time-wise as a result is almost beyond belief.

With Craig doing his sterling work we got out of the hospital on the 15th with antibiotics and supplies to do Adam's infusions at home (or in our case Renucci House) until Tuesday night -- making a total course of 10 days IV ertapenem. His white blood cell and neutrophil counts were on the up, a good sign of his body's growing ability to fight the infection itself, though still someway short of where they ideally needed to be. And so began the daily routine; 7am antibiotics out of the fridge, 8am flush, 30-minute infusion, flush, heplock; 7pm antibiotics out the fridge, 8pm …

All went without a hitch; my first test in home nursing and I passed with flying colours. Although I must confess, after the best part of four years watching nurse after nurse pushing stuff into Adam's veins, the very first time I started applying pressure to the syringe it did feel just a little bit odd to be doing it myself.

We'd arranged to have Adam's blood counts rechecked on Monday, having given him a G-CSF shot on Saturday and skipped Sunday. As we'd hoped, his counts had continued to improve, and his neutrophils at 3,000 were now right where we wanted them to be. None of his repeat blood cultures had come back positive for infection. His sodium, potassium, albumin, and creatinine levels, which had been all over the place during the previous week as the stress of the infection took it's toll, were back within normal ranges. The whole situation was beginning to look brighter.

The last antibiotic went in on Tuesday evening and on Wednesday morning we took Adam up to clinic to have his port deaccessed -- blessed relief for the little boy who'd been accessed for 12 days straight except for a couple of hours between line changes. As Adam has a port now (as opposed to a hickman) he doesn't always have a line attached -- when he does that's referred to as being accessed. Otherwise he just has the port site on his side under the skin where the line into his vein is channeled up to. His movement is restricted when he's accessed, and he finds it difficult to sleep lying on his right side.

We saw Dr Sholler at clinic and she told us the tumour analysis was going well -- the genomics report should be available on Thursday with a view to resuming treatment on Friday.

We returned back to Renucci House, and after he'd had a couple of hours sleep during the course of Wednesday afternoon I checked Adam's temperature. He had been snuggled under the duvet -- we brought his own duvet and pillow out with us this time for added comfort -- and he felt a little hot. 38.6°. Shit. Or worse.

We don't generally panic any more, we've been doing this stuff far too long for that. But I can tell you -- this was worrisome. Having been warned that the infection Adam acquired was a particularly nasty one, having been told several times that it has a habit of coming back even after antibiotics, and having listened to the senior doctor on the ward saying he hoped Adam would recover, who wouldn't be worried? We pulled his duvet back and over the next 5 or 6 hours watched nervously as his temperature fluctuated around 38° -- 38.1°, 37.8°, 38.0°, 38.1°, 37.9°, 37.9°. Alison had packed the overnight suitcase, and we were all ready to make the call to be readmitted to the hospital. Another reading over 38.5° and that was it; back to the hospital, back on antibiotics, unable to start treatment on Friday -- and that was supposing the infection wasn't even back. If it was, if the 10 days of antibiotics and Adam's recovering immunity had failed to deal with it, what then? I decided I wasn't even going to bother going to bed. At 01:00 Adam's temperature fell to 37.4°, followed by 37.0° at 01:30, and 37.2° at 02:00. And at that point I breathed a massive sigh of relief and called it a night.

When Adam woke on Thursday his temperature was still normal, where it remained throughout the course of the morning and afternoon. The evening followed a similar pattern to the night before; temperature rising, though this time not quite as high, and for not quite as long. Whilst staying vigilant, and checking regularly, with the benefit of the previous 24 hours we weren't quite as worried this time. On Friday morning Adam's temperature was again perfectly normal, and we've not had a repeat episode since. I have no idea what the cause was, I'm just thankful it wasn't worse, and it didn't lead to anything.

On Friday we met Dr Sholler to discuss the new treatment plan. Adam needed a blood transfusion, and it turned into a long day in clinic as a hastily arranged electrocardiograph and echocardiogram were required to monitor potential side-effects of the new targeted combination therapy; thalidomide, dasatanib, and pravastatin. These drugs, amongst others, scored highly on Adam's genomics report and this particular combination was then selected by a panel of oncologists based on Adam's individual circumstances, history, etc.

Each cycle of treatment consists of 28 consecutive days of these three oral drugs, and the first cycle must be completed at the study hospital. Which means Adam will be out in Grand Rapids until mid to late April at least. We always expected this, the only variables being whether Adam was going to be well enough to even enrol on the study in the first place, and after that whether each cycle would be 21, or 28, days in duration. The big shock came when we found out the cost; thalidomide in particular is crazy expensive. The cost of a 28-day supply of the drugs is around $25,000. We are ever thankful to have the NB Alliance supporting us, and Adam's Appeal funds to give Adam the opportunity to hopefully benefit from this new trial.

Adam has tolerated everything well so far; thalidomide has a sedative effect and so is taken just before bedtime, apart from that there are no other restrictions. He's been suffering from various aches and pains, including a recurrent and persistent one in his lower back, but we are managing things reasonably well. We have to balance effective pain relief against the inevitable consequence that he will sleep and therefore be unable to eat or drink anything. Eating in particular remains an issue, but he's maintaining his weight at the moment and realistically that is our goal at this stage.

We discussed physical therapy with Dr Sholler, to try and improve Adam's muscle strength, mobility, etc. She suggested aqua therapy, and with Adam being keen we went along to a pool on Wednesday to give it a go. Alison and I came out with the same very mixed emotions. Adam, bless him, tried his absolute hardest, and he was so keen to get in the water. It's been a long time since we've seen him like that -- he even tried swimming under water to play trick on his new therapist. Unfortunately the pool was just too cold, colder than it was supposed to be; for a little boy with zero body fat and incapable of vigorous movement he was shivering within minutes and we had to get out shortly thereafter. But we've not given up. Adam's is happy to try again so we are in the process of finding a different, warmer, pool that we can go to. Providing it works out, and his immunity remains high enough, this will hopefully become a regular activity.

With the Easter holidays here, Jake and Jess are going to fly out next week to be with us. They're being escorted to Heathrow by grandparents and then flying out by themselves. Either Alison or myself will be there to meet them at Detroit airport when they land. We've rented a place by Lake Michigan, and just hope Adam stays out of the hospital and well enough that we can make the most of the time we'll all have together. They are amazing children my eldest two, getting on with their lives as they have in spite of everything that has gone on with Adam over the years. I do miss them though. Jessica was just finishing infant school when Adam was diagnosed; she'll shortly be starting her final term at junior school. It sometimes feels like her growing up has completely passed me by. 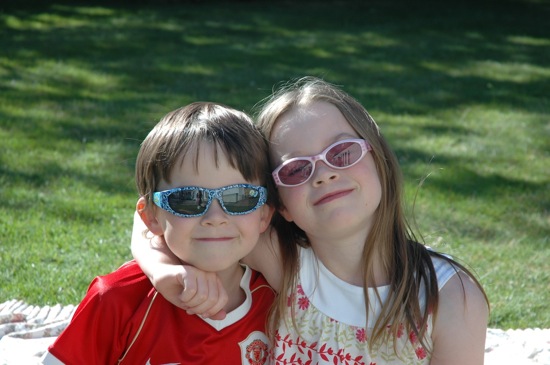