A Week In The Life: Infections, Scans, Biopsies, Home Infusions …. 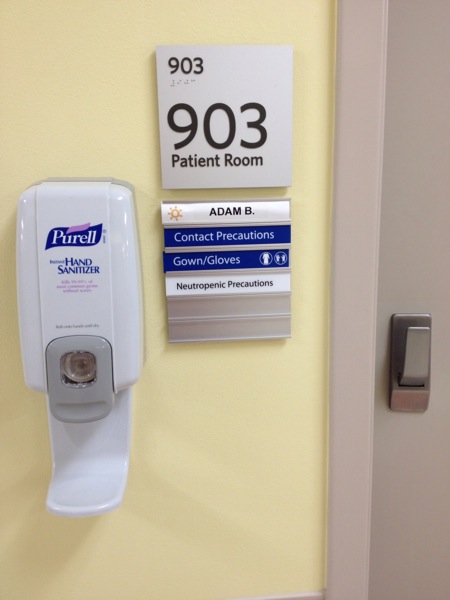 Adam is still in the hospital. This is his eighth day of incarceration, each one costing a small fortune. He has remained afebrile since last Friday, and repeat blood cultures continue to come back negative for ESBL Klebsiella Pneumoniae bacteria. This is, of course, great news, but we regard it with caution. The infection he acquired is a particularly nasty one that can return even after treatment with antibiotics, and negative blood cultures do not necessary mean there is no bacteria remaining anywhere in Adam's body.

The name Klebsiella Pneumoniae suggests Adam has pneumonia, but he does not. He has bacteremia - the bacteria found its way into his bloodstream which is what makes it so dangerous, particularly in an immunocompromised patients such as Adam. All that said, things are heading in the right direction; no fevers, negative blood cultures, and Adam's white blood cell count (a measure of his body's ability to fight infections itself) has risen steadily with each passing day. Today it's 1.5, we want it to get to around 5. However, 1.5 is a lot better than the 0.03 that it was when he was first admitted.

Looking back on the past week we actually got very lucky. Adam spiked a temperature on our first morning in Michigan, it could easily have been the day before at 30,000 ft over the middle of the Atlantic; the bacteria infection clearly responded to the broad-spectrum antibiotics which isn't always the case; and we had positive cultures and sensitivities back from the microbiology lab that allowed us to change to a targeted antibiotic within two days of admission to the hospital.

One of the things I love about Dr Sholler is that she 'gets it' as far as what parents go through on this terrible journey. She didn't encourage us to come back to Grand Rapids, and she didn't discourage us either. She made it clear Adam would be welcomed back, but it was our decision to do what we felt was right. A few weeks ago Adam was in no position to come back out here, we wouldn't have even contemplated trying given where he was at in terms of pain and feeling generally awful. But then we managed to get on top of things, Adam became far more settled, and coming back out went from feeling like the wrong thing to being the right thing.

The plan for our visit was FDG-PET/CT on Monday, with bone marrow and lymph-node biopsy Tuesday for enrolment on the new molecular-guided therapy trial that opened here only last week. Ordinarily an infection of any sort will scupper any and all plans for therapy, but the team here got Adam prepared for Monday's scan and it went ahead as planned. He was still pretty wiped out, but apart from having to consume a contrast drink the scan doesn't require much else from Adam himself. Unsurprisingly he slept through the entirety of it.

Scan results showed progression. Of course that's horrible news, but it wasn't anything we weren't expecting. It says something when you're pleased that the scan isn't as bad as you thought it would be. There was an interval increase in intensity of the skeletal uptake, growth in the lymph nodes, all of which are now at least partially calcified, but no new areas of disease. It wasn't catastrophic, it wasn't 'get-back-on-a-plane-and-return-home-again' bad.

And so to Tuesday. If the PET/CT scan was looking shaky at one point, the prospect of bone marrow biopsies, and a long needle lymph node biopsy, on a child with an ESBL infection and zero neutrophils, might be expected to be a complete non-starter. The idea of enrolling on a clinical trial whilst getting treated as an inpatient equally so. But things are not quite the same with Dr Sholler. There are rules for sure, you cannot go on study with an active infection, period. But there is also flexibility, and a consideration of the big picture. There are competing risks, big and small, some more immediate that might warrant delay and others less immediate but that would increase with the passage of time; some lines that can't be crossed, and other boundaries that can pushed a little. How did we feel about going ahead despite the current situation, after all Adam was on strong antibiotics? Delaying biopsies beyond Tuesday/Wednesday would mean the analysis reports coming back a full week later, meaning another week before Adam could begin treatment even if he were well enough to sooner. Provided blood cultures taken Sunday morning remained negative 48-hours later on Tuesday morning (which they did) Adam would be eligible for the trial. For me it was a simple decision. The bigger question mark was whether the interventional radiologist would be prepared to perform the procedure given Adam's condition and blood counts; we left Dr Sholler to sort that one out. We had our answer when, during Monday evening, the nurse came in to say Adam would be getting platelets overnight in readiness for the following day.

Monday night was one of those horrible hospital nights. Machines beeping, interruptions, platelet transfusion, monitoring vitals, blood draw, monitoring vitals again; we didn't really get any settled sleep until 4am. And of course on the day Adam had to be nil-by-mouth he woke up complaining that he was hungry - something I'd not heard him say for weeks and weeks. From telling him he's got to eat and at times practically force feeding him, I'm now saying he can't have anything to eat until mid-afternoon! Well, I didn't actually say that, of course, I just told him he couldn't eat yet for a while. If you repeat that enough times over and over eventually you get to a point where you can say 'another half-an-hour and you can have something to eat and drink'.

Adam was as grumpy as grumpy can be on Tuesday. He just gave off this look that said 'You'd better have a very good reason for talking to me … or don't.' Not many people did. He lacked sleep. He was hungry. He was apprehensive about what was coming, he knows how it feels afterwards. If he wants to be grumpy under such circumstances I figure that's his prerogative. The anaesthetist was very approachable and listened to us explain Adam's post-anaesthetic apoplexy after getting propofol. He was more than happy to use ketamine in the first instance, and only resort to propofol if Adam started to move - clearly being totally still is rather important whilst undergoing a needle biopsy that goes in through the back, down past the kidney and into a lymph node in the pelvic region. Everything went to plan, the team got what they needed and Adam returned to the recovery area in a spaced-out ketamine-induced sleep. Only a small amount of propofol was required, and thankfully Adam woke up slowly and without adverse effects (ketamine can cause waking nightmares). As an added bonus he took longer to wake up than usual, which was also helpful as he's not allowed anything to eat or drink for another two hours after the procedure - in case he suffers an internal bleed that requires emergency surgical intervention.

Tuesday night was another rubbish night, but for a different reason. All the sleep Adam had during the day meant he wasn't able to settle down at his normal time. So on Wednesday he was grumpy as grumpy can be. Again. From lack of sleep, and a very sore back complete with three fresh new holes in it. 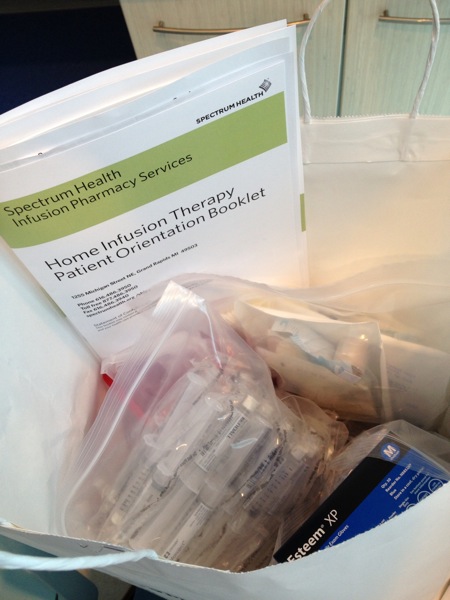 Since then Adam has gradually improved; the pain in his back from the biopsy sites has receded, he's had a couple of very good night's sleep, and he's been eating and drinking alright too. We don't have anything planned now in terms of treatments or procedures until after the analysis reports on Adam's biopsies come back next week. Which hopefully means we have a full week to get clear of this infection completely. In which case, rather miraculously, we will not have lost any time as a consequence of Klebsiella Pneumoniae.

This afternoon we've been discharged back to the Renucci Hospitality House to continue Adam's antibiotic treatment as a home care patient. Tonight we have a nurse coming to us, to train me how to manage Adam's line and administer the twice daily infusions. Each dose is provided in a separate self-infusing portable pump that we will keep in a special fridge back at Renucci. We have a plan for next week in terms of going into clinic to check counts, have blood taken for repeat cultures, etc. But if this works out we're done with being an inpatient; it'll be me infusing, flushing and hep-locking for the next four days. How cool is that? Adam's pain remains under control with the fentanyl patches we're using. It's our fervent hope it remains so, and we get through to the resumption of treatment without further setbacks. We are also realistic enough to know that with this disease not only does it not always work out that way, it doesn't often work out that way …

It wouldn't be right for me to finish this update with saying something about the care Adam has received in the week that he's been inpatient here at Helen DeVos Children's Hospital. I know I speak very highly of Dr Sholler, but across the board the doctors and nurses that have been looking after our little boy have been exemplary. There are a few annoying rules, but I can hardly blame the individuals that have to abide by them can I? And even then, we've been listened to and our wishes accommodated as much as has been possible. Nobody has broken the rules for us, but they may have been bent a little once or twice for Adam's benefit. And to me that's the only consideration. Always. It's not about me, or Alison. It's about making adjustments here or there, sometimes seemingly trivial or minor, that make Adam's life just that bit more comfortable. But never anything that exposes him to additional, or unnecessary, risks. And finally, extra special thanks to Craig … without whose efforts we'd still be in room 903 in the hospital, instead of room 306 in the hospitality house.