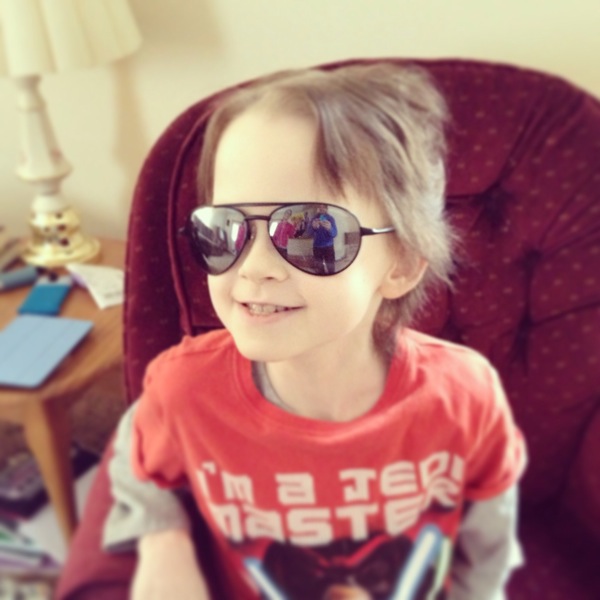 So. It was a Thursday when I posted the last updated 'Treatment begins again …'. On Friday morning Adam woke with an excruciating burning pain in his upper back -- just below his right shoulder blade. We gave him a hefty dose of pain meds and as he slept I called his doctor, as this was clearly not one of the usual aches and pains Adam suffers from now. He'd actually started complaining about it the day before, but at that point we'd thought it was more of the same. But on Friday morning, both from how he described it and how it affected him, it clearly was not.

Fortunately, Dr Sholler was around on Friday; she said to see how he was when he woke up and if the problem persisted to take him up to clinic to be assessed. He woke after lunch and if anything the pain had worsened. He could no longer bear anything to touch his skin in that area, and when he moved the intense burning sensation would cause him to scream out in pain. It was a harrowing and horrifying sound; full-throated screams of pain, as if an imaginary hand was pressing scalding hot coals against Adam's back.

A second call to Dr Sholler and we got Adam in his pushchair and off to the hospital, shirtless, a blanket for warmth, strategically positioned so nothing was touching his back. At this point neither Alison nor I had any idea what was going on; this was new to us. When we got to clinic they were waiting for us to arrive, a quick set of vitals, and straight into an exam room. Ten minutes later Dr Sholler was on the scene to assess Adam. Verdict was neuropathy caused by the new medications -- most likely the Thalidomide even though it was only one week at the lowest dose, one-third the final target dose. Only option was to stop all therapy and wait for symptoms to abate. As well as the back pain, Adam was also experiencing numbness in the right side of his lip and chin.

We started Adam on gabapentin for ongoing neuropathic pain, and managed the immediate pain with opiates. The balance (as always) to be aggressive enough to keep Adam comfortable, but also for him to be awake and alert sufficiently often for us to get food and drink into him. As the weekend wore on Adam's pain subsided and the intervals between doses of pain medication widened. However, at the same time swelling appeared in Adam's lip, chin, and above his right eye. On one hand you know it's almost certainly all part of the same reaction. And on the other you cannot help but worry that this is something else -- something even more sinister.

By Monday Adam was sufficiently better that we restarted two of his targeted therapy drugs, Thalidomide we held off until Thursday. He's been back on the three-drug regimen (albeit still at the lowest dose of thalidomide) for 6 days now. There hasn't been another severe reaction yet, but at various times he has complained of numbness, the palms of his hands feeling hot, and his leg feeling 'weird'. I can only guess that the gabapentin is masking the worst of the neuropathy, but it still doesn't bode for the chances of Adam continuing long term on this drug, and I certainly can't see us dose escalating. We may need an alternative plan.

Jake & Jess flew out to Detroit last Tuesday by themselves, looked after by our friends at Delta Airlines. It's been great having them out here, although it's not been your typical Easter holiday vacation for the pair of them. We rented an out-of-season holiday house in Holland, Michigan next to Lake Macatawa where we've all been staying. It's a 45 minute drive to the hospital in Grand Rapids, but it's worked out pretty well for us so far. Tomorrow I am flying back home with them ready for the start of school next week, and I'll fly back out in a few days. Looking after Adam, making him comfortable, getting medications down him, ensuring that he drinks enough, getting him to eat regularly, is a full-time job. Day after day, it is, quite simply, relentless. But that's where we are, and that's how it is. It requires both of us to be able to do what we need to do, and so I'll be back out here as soon as I can. Except for parents who have been in this situation before us it's probably difficult to understand just how hard this all is. It probably even sounds a little pathetic requiring two of us in order to cope -- I can only say believe me, it's not.

We've been fortunate that there is a large aquatic centre ten minutes drive from where we're staying, complete with a 90° therapy pool. We've been in twice, the second time, on Saturday, Adam had an absolute blast. Jake and Jess came in too. We played with a beach ball -- throwing, pushing, heading -- and only got told off once for being a little too boisterous. It's been a long time since Adam has laughed and had so much fun. We'd probably been in the pool for in excess of half-an-hour, and there was only five minutes of the session left when Adam brought things to an abrupt end by deciding to perform a forward roll and getting water stuck up his nose. The main pool at the centre also has a splash zone with inflatables, a zip wire, and diving boards so after spending time in the therapy pool Jake & Jess have been going in there whilst Adam watches from the sidelines wrapped up in his towels.

On Sunday Adam ached all over; his back and both legs, shoulders. The after-effects of the previous day's exertions. He needs regular exercise, but gentle exercise, and so we will definitely keep on at the swimming, even though Adam might not always be so keen when he's not feeling as good as he was on Saturday. Sometimes he needs bullying into doing things, when his general malaise would rather he laid on the bed and watched his laptop. Sometimes he tells me he hates me, and calls me mean, but it's more than outweighed by the reward of seeing him in the pool and doing something positive.

As much as I hate to admit it, we are started to rack up some hefty medical expenses. With Adam's inpatient stay at the start of our trip, a monthly drugs bill of around $25,000, plus all the clinic visits, biopsies, tests, etc. I know that costs are escalating. So, if there are any runners out there looking for a cause, or people wanting to do something else to help Adam then please get in touch with the team at the NB Alliance -- http://www.childrenscancer.org.uk/contact.php.