Adam completed his first week of the new drug combination on Friday without major incident. Five capsules of temozolomide taken orally one hour after lunch, a one hour break, and then a one hour infusion of irinotecan administered at the hospital. The biggest problem, compounded by the fact that until Friday he was still on IV antibiotics, was the late finish which meant we needed arrangements for Jake & Jessica coming out of school. Even that wasn’t a major issue, we know help is never far away.

Adam stayed quite well in himself throughout the whole week of treatment, and that has continued into this week too. There’s no clearer indication of this than the fact that we’ve hardly taken his temperature. The only time I can recall was on Sunday when Alison took it ‘just because we hadn’t for so long.’ My contribution was to inquire why on earth he had a tempadot in his mouth. He’s not currently being given GCSF as this chemotherapy is (supposedly) not as severe on his blood counts as the others he’s had. Consequently we are not seeing as much of the community nurses, and we didn’t need to travel up to Epsom over the weekend either. So far his counts have held up okay, but 5-7 days is the time that they reach their lowest point, so we will have a complete picture by the coming weekend.

The most obvious side-effect (or what we assume is a side-effect, as we’d been warned it would be) is Adam’s frequent toilet trips and bouts of diarrhea. Tummy ache, diarrhea, sore bottom. Over the months we’ve become accustomed to trying to get him going to the toilet again after chemotherapy - fast and loose is a novelty. I went up to the hospital today to get some special anesthetic so hopefully that will help ease the soreness.

When school was shut for polling day Alison took Jess and Adam to Chessington for the day, and Adam was back there again on Monday with his Mum. This time, however, he didn’t manage to stay on the runaway train for five turns in succession as he had on the previous occasion.

When we were at the Charlton - Leeds match at the start of May it was mentioned to Adam that he should come back one day as mascot. With Charlton in the play-offs he was invited to fulfill that role on Monday in the return leg of their semi-final against Swindon. What an amazing night he had. Adam is definitely no longer phased by being around footballers, or television cameras, that’s all I can say. He went round the Charlton dressing room and collected signatures from everyone. He went round the Swindon dressing room and shook each player by the hand. He stared the Sky cameraman down in the tunnel. He was just so full of life, and so happy. He was doing what a little boy should do - I even had to tell him to stop jumping around so much when we were waiting for the Swindon players to arrive! Poor little fella can’t win! 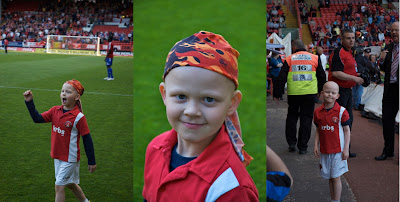 I’d decided in advance that we wouldn’t stay for the game itself, Adam’s health comes first. It didn’t take long for that to be proved the correct decision, he was asleep before we’d got halfway home.

Yesterday I went to give blood at a session being held locally. Much to my shame this was the first time I’d ever donated. I can’t do anything about the past, but I know I’ll never be the same person I was before Adam became ill, living in my own little cocoon world. I’ve seen too much, and been affected by too much. When I arrived home Adam came running up and gave me a cuddle. I asked him why and he told me it was because I’d had to have a needle in my arm whilst they took my blood. At least he didn’t tell me I’d been a very brave boy and offer me one of his stickers as a reward....
Posted by birdni at 01:24