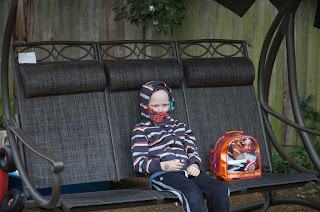 Adam's results when we got them today were clearly not what we were hoping for. But in truth they were probably closer to what I expected than not. He hasn't responded to the last two courses of chemo at all. Although he had shown a response to the other four courses of TVD it wasn't a dramatic one so I was never expecting that he would suddenly and miraculously be clear. I had hoped that he would continue to respond, and that it would be sufficient to clear his bone marrow, and that for me is the single biggest source of disappointment. At the same time his scans and bone marrow are no worse than last time, there are no new lesions or evidence of progression. Because we feared worse news I suppose we have found something positive to focus on.

The longer the week has gone on the more convinced I have been that Adam's legs and feet are the combined result of the chemotherapy and doing a lot more than he has before at an equivalent stage in the treatment cycle. All the stuff at the weekend with bin-ball, tennis and cricket must surely have contributed. Once he gets everything going he does seem fine. Of course until he stops limping altogether we won't stop worrying completely that there isn't a more sinister explanation. He hasn't complained about his arm or stomach for days. Our consultant checked him over today and didn't think there was anything more to worry about other than what we already know. His blood counts this time have recovered really well. His HB, following the aborted blood transfusion on Monday, was over 12 today. That's practically normal. And unheard of for Adam.

As to where we are now with Adam's treatment I know I keep going on about it but we have to get a clear bone marrow so that we can progress to stem cell harvest. It opens up more treatment options, albeit harsher ones like MIBG therapy. If we could get a clear bone marrow and a definite response on the MIBG scan this would be a very positive sign. Because samples are only taken from two sites it's always possible to get a false negative bone marrow test once the level of NB cells becomes small. This is why I think a definite response on the MIBG scan would be a very good accompanying sign.

As expected Adam is going to start on temozolomide and irinotecan from next week. Adam's consultant and the other experts at the Royal Marsden believe these two drugs are the best combination to try next. They are quite new to upfront Neuroblastoma treatment, although they are routinely used in relapsed children in the UK. They are classified as 'high cost' drugs and can only be given in upfront therapy in exceptional cases following a formal approval process. So there is an amount of bureaucracy to go through, but Adam should begin treatment next Wednesday. One of the drugs is given IV and the other is taken orally in a capsule form. So Adam will only need to be treated as a day patient for now. The new schedule is both drugs every day for 5 consecutive days, with 3 to 4 weeks between cycles to allow his blood counts to recover. He can have 4 to 6 courses but the plan is to repeat all the investigations after 2 courses in order to see what effect (if any) the new drugs are having.

So it's pretty much as you were. The last two months have done nothing to help Adam beat this disease, and we can only hope that the next two months have a much more positive effect.
Posted by birdni at 23:19