A day to remember... 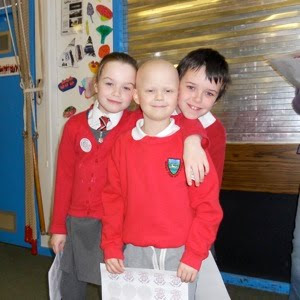 Wow. What a bunny-hopping crazy mad day. I'm still buzzing so I thought I should try and get something down before my head explodes and it's all lost forever.

Where do I begin?

Well maybe Monday actually and the Juniors, not the Infants. Jake & Jess had told us that the Wallace Fields Junior School coin collection had resulted in a LOT of 1p and 2p coins being brought in, but I still raised an eyebrow (and as the rules say I have to be honest when writing this blog had a little chuckle) when an email came round asking for parent helpers to go in and assist the counting effort. No wonder they couldn't lay them out in a line and measure them. I thought it was just the weather.

As for things back home... on Sunday and Monday Adam was quite low, it being a week since his last cycle of chemo had finished. His blood counts had dropped very low again despite the transfusions over the weekend. Any lower and he'd be back in for more. His temperature hovered almost constantly at 37.9. Bearing in mind that two consecutive readings above 38.0 one hour apart means a minimum 48-hour stay in hospital we thought it likely that he was going to miss the infant school bunny hop. And that would be a shame. A shame because we were hoping for some media coverage at the event that could make a real difference to the appeal, a shame because all these wonderful kids, their parents, and the staff were doing everything they could to make it a fantastic event, and a shame because we thought Adam would enjoy going and being a part of it all.

His eating and drinking were off, as they usually are, but not quite to the same extent as on previous occassions. And his mouth and throat ulcers didn't seem to be quite so severe either. As yesterday progressed he seemed to get steadily better in himself. In the afternoon our family support worker came in. Adam likes her coming round and you could hear him laughing and giggling away in his bedroom. At one point Alison went in and was told to get back out again pronto! As the day went on it was clear Adam was on an upward trend. Late afternoon a photographer visited us to take some shots for a piece the local paper are putting together and Adam was a very willing participant. The day ended with him going to sleep far too late for a 6-year-old boy. But perversely going to bed late has become a reassuring sign for us. When he's 'tired and just wants to go to sleep' at 7.15pm then we worry. The far bigger problem is trying to get Jake and Jessica into bed whilst Adam is still watching TV! They are older than him for goodness sake!

So come this morning I found Adam awake and in Jake's bed joking and in good spirits. And that was probably when we really thought 'he's actually going to be able to go'. And then we got to thinking that it would be cool if Jake and Jessica were there to. We'd have to let the Junior school know we needed to borrow them for an hour or two. And then we got to thinking that the weather was cold, wet and horrible and they'd probably be doing it indoors. All those kids. And Adam with no immune system. In the same room. And wasn't there a couple of cases of Chicken Pox in reception just recently? As we've come to realise over the months, when you have a child with cancer there's always something to think about. Nothing is ever simple and straightforward.

So Alison called the school and the answer came back that the last case was a couple of weeks ago. We felt a little better but of course the incubation period is up to 20 days. Chicken Pox is one of the diseases that is very serious if Adam catches it, potentially life-threatening. Even though he has had it in the past his immunity has been wiped out, as it has to everything else. We can be careful, we can take precautions, and we can try and minimise the risks, but ultimately we can't lock Adam away and stop him from having any contact with the outside world. So there was never any question of us not going. Instead we thought we would keep him away from Reception more so than the rest of the school. That's where the outbreak was and (rightly or wrongly) we surmised that a higher proportion of those children wouldn't have had Chicken Pox yet.

We asked the Community Nurse team to come at 9 today to get the daily chores out of the way. Bloods done and GCSF infusing, I caught Adam laughing and joking on the bed with Tara, negotiating over extra stickers as it'd been a long time since he'd seen her. Adam has a secret sticker stash that he keeps in a little stationary draw. He's got all sorts in there now, although I guess it's not quite so secret anymore! We were hoping to get to the infant school for 10am but by that time the GCSF had only just finished and Adam was still in his pyjamas.

It's been a long time since Adam went into school wearing anything remotely approaching his school uniform. But this morning he was only too willing to get into his school shirt and jumper. It set the tone for the rest of the morning. Trousers were more of a problem, but only because it's been 9 months since Adam was last at school and he's no longer got any that fit him! We picked up Jake and Jess and got to the infant school just as Reception were in full flow. Adam wasn't pleased. He'd expected the bunny hop to be conducted outside and initially refused to partake of an indoor event. However, it didn't take long before we persuaded him to sit on the bench at the side and watch. And then the fun really began.

For we had brought stickers. Special 'I've helped Adam' stickers. And lots of them, enough for everybody. When Miss Mann announced this to the school Adam grew in confidence and starting to enjoy being the focus of attention. Our concern that he would shy away from things and hide behind his Mum's legs was starting to prove ill-founded. As it turned out we couldn't have been more wrong.

I honestly don't know how long it took for each of the children to bunny hop round the path laid on the school hall floor but all of us there enjoyed every minute of it. First the kids posted their sponsorship money into a basket and then off they went weaving round the room, mainly hopping, though I did catch a few skips as well. I think it was in haste to reach the end of the trail where a huge basket of chocolate eggs was waiting (only one each of course), along with my 3 lovely children ready with stickers for all. Adam loved it. He could not have been happier stood there dishing out HIS stickers. I also have to mention Jessica and Jake who got into the spirit of things as well and helped make is a really special morning for us. They did us proud.

At this point can I ask that you please spare a thought for the teachers too, who were required to demonstrate the art of bunny hopping before each year group began their travels. I feared that the poor year 2 children might miss out altogether as there seemed to be a real danger that the teachers preceding them might not finish before school broke up for Easter!

All of the hopping and the fun and the laughter was captured by ITV who were filming the whole event, and will hopefully be running a story about it at some point. Some of the children, and the head, Miss Mann, were interviewed and whilst this was going on Adam decided he would get busy and began to open the sponsorship letters. I can tell you he had THE most fantastic 30 or 40 minutes opening envelopes and putting cheques in one pile, and notes in another pile and coins in a pot. It may sound rather mundane, but believe me mundane can seem rather good when you have days like we do. Adam being a normal, cheeky, chatty 6-year-old was an absolute joy to behold. He was in school where he belonged doing the sort of thing that a boy of his age should be doing. I just sat back and watched, only getting involved to remove the odd staple and offer a gentle reminder that it was okay to tear the envelopes and even the slips but the cheques and money needed to remain in one piece! And they did. Sally from ITV joined Adam, Miss Mann and I in the office and did some filming as Adam went about his business. And ironically given what I had said about the radio interview early in the week, the whole thing brought a tear to my eye. Well several actually. I soooo need to get more sleep. Eventually Adam finished and every envelope was empty (not that I doubted his thoroughness but I did ask that they be checked later) and we returned home really happy with how everything had gone. But happy most of all because Adam had enjoyed himself and played a full part in making it such a memorable occasion...

Tonight Adam has gone to bed a very happy little boy. And just for once so might his Dad.

01/04/2010 P.S. I know I'm an adult and I don't have to call Adam's head teacher Miss Mann. But I'm afraid that having had children in the infant school for the last seven years it's what came naturally. And I'm not going back and changing it now!
Posted by birdni at 14:23