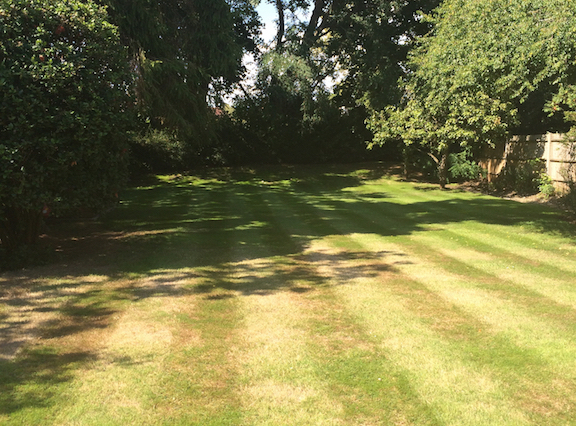 So this is it then? The one day of glorious sunshine before the promised bad weather arrives to usher in the end of August, marking the beginning of the end of the summer holidays.

The forecast was right for today at least.

The sun is fiercely hot in an almost cloudless blue sky. Everything is quiet, and still. Once in a while a light breeze blows through, causing the trees to sway gently, but never sufficiently strong enough to disturb the tranquility.

I feel the heat of the sun on my back.

I’m standing in the garden, looking down towards the railway line. Not for any particular reason, this is just where I happen to be. I can’t recall when a train last passed by. There’s no traffic noise from nearby roads. No voices from neighbouring gardens. There are no foxes in attendance, no squirrels scurrying around in any trees. There is literally nothing upon which to focus my attention. And in this moment I’m struck by how utterly peaceful it is.

I take in the silence, and allow my eyes to close.

And I can see them, the two of them. There they are near the end of the garden, up there in the shady area away from the sunlight. The sprinkler is on, spraying out jets of water; first one way, and then the other. Back, and forth, back, and forth, back, and forth. Adam is screaming as the jets move through the vertical and begin to curve down towards him. He’s doing a weird dance, hopping from one leg to the other as though the ground beneath him is covered in hot coals. It isn’t of course, it’s just the excited anticipation of a young child at play. At the last second, just as the water is about to reach him and his screams are at their loudest, he jumps backwards out of the way, and runs round to the other side in readiness for a repeat performance.

And now Jessica is joining in. She’s motioning Adam to go closer, daring him to stand right next to the sprinkler. Now telling him he’s not allowed to move. This time he squeals in delight as the water passes over head, and there is no escaping it. He beckons his big sister to do the same on the other side.

Look at the two of them! Both wearing swimming goggles out in the garden; Adam in blue, Jessica in pink. Of course. Siblings, and best friends. Adam had been wearing a hat to protect his bare head from the sun, but that didn’t last long. Within seconds of getting into the paddling pool he’d adopted his favourite position; hands, feet and head all submerged. The hat now pegged to the clothes line, drying.

Adam wants the beach balls out. And the bags of multicoloured play balls. And the cricket bats. Now he wants to use the hose pipe to put some more water into the paddling pool. Apparently there’s not enough in there any more, and it’s not very fun!

Were it not for his bald head he’d look every part the normal healthy six-year-old boy. A white sun top hides the fact that his chest is wrapped in layers of cling film, beneath which lies the central venous catheter that delivers the chemotherapy direct into his blood system. It doesn’t appear to be bothering him at all though. The worst part was getting him ready, when all he wanted to do was run off and play.

He looks especially beautiful today — if that’s even possible! There are beads of water on his scalp and face, that are glistening in the sunlight.

And then, it changes. The paddling pool and sprinkler have disappeared. There’s a badminton net across the garden. We’re playing doubles. Adam’s hand-eye co-ordination is pretty good; perhaps it was the tennis lessons he had before he fell ill?

He’s had enough for the moment. Time to take a drink, and seek respite on the swing seat. He’s going to be the referee. Oh it’s like that is it? Giving the other team an unfair advantage so that Dad loses every time.

Only it’s more than that. Everybody has memories. Life moves forward, and we make new memories. Old ones fade, become less significant.

We live in the present.

Except part of me will always be anchored in the past. There are no new memories of Adam to be made. The selection, good and bad, is finite. And it must be treasured, for to forget is a betrayal.

Today reminded me of that. It was vivid, it was almost real. For a few cherished moments of complete serenity I was living in the past. I hope it’s not too long before I can go back there again.