A Happy Christmas … we hope …

Adam’s latest blood results were on the up but still not sufficiently high to seriously consider pushing for any more treatment before his next MIBG therapy at the start of January. These gaps in treatment have always been a concern to me and to be honest since July Adam has only had a five day course of oral temozolomide and a 3-hour infusion of cyclophosphamide. It’s hardly intensive stuff. Of course he also had his first MIBG therapy at the end of September but I am never sure how long lasting inside the body MIBG is. I also have to keep in mind that Adam has had a lot of chemotherapy; (literally) a lifetime’s worth of sub-lethal doses of some of the most poisonous drugs modern medicine has to offer. Much of it has done very little other than destroy healthy cells and cause collateral damage to some of Adam’s vital organs. How much of it has done more harm than good? We’ll never know the answer to that. However, I am entirely convinced that there have been occasions when Adam has been having treatment that has made me feel better because he is having treatment, but that has done absolutely nothing whatsoever to combat his cancer.

So now we’re just hoping Adam stays well over the coming weeks and has the best Christmas ever here at home with his family. No doubt we’ll spoil the kids as we usually do, the difference now is that I don’t even care in the slightest.

We’re due back on the treatment bus on January 5th now. Our schedule for UCH has been put back by one day so they can ensure delivery of the radioactive isotope. I say ‘ensure’. It comes over from Germany I believe the day before it’s administered so there is always the possibility that if the severe weather over UK and Europe continues into the New Year it could end up delaying things still further. That’s for another year though, we’ll cross that bridge if we get to it.

For now all that remains is to thank everybody for following Adam’s story, and for supporting Adam’s Appeal during 2010. Believe me when I say it has brought us much more than just financial assistance.

Wishing you all a very Merry Christmas and a Happy New Year. x 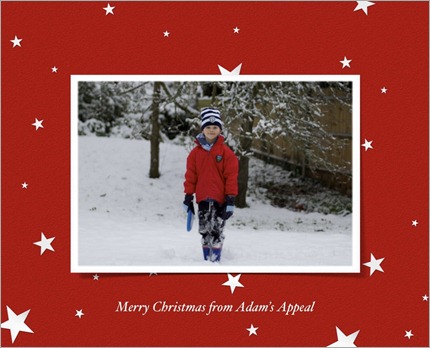