The Countdown to Christmas Has Begun …

So it looks like Adam will be having an uninterrupted run between now and Christmas. His blood counts on Friday were not great on the platelet front and the thinking is now that we’ll let him recover from the cyclophosphamide and stem cell harvest before we go into MIBG therapy at the start of January. The centrifuge that separates the components of the blood during the harvesting procedure is particularly destructive on platelets, and his count supressed by chemo wasn’t that high to begin with. We are getting his bloods redone tomorrow so we can see how things are progressing, but actually UCH is only 3 weeks away now so there isn’t really time now to do anything before then. However, I know better than to make a completely definitive statement to that effect. I’ve learnt it’s best to keep the language on here littered with a liberal dose of ‘probably’ and ‘looks like’ and ‘really’ and ‘in all likelihood’.

Today was Alison’s 40th birthday and it’s been a really good day. Not the birthday that we once thought it would be; but we’re not the first couple whose long standing plan of going away somewhere special for a something-zero birthday never materialised. Maybe one day. For now it was enough that we were all home together and able to enjoy the day as a family.

This morning Alison and her parents took Adam to see Santa at one of the local garden centres that has built up something of a reputation for putting together a good festive display. Adam returned in a brilliant mood. “It was SO good” he told me before showing me the collection of Christmas decorations that he charmed/hassled his Mum into buying him whilst he was there. 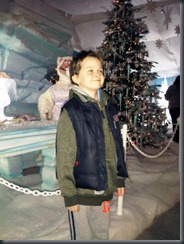 At the moment Adam is eating well and we are continuing with the supplementation and daily routine that we hope will strengthen his body and boost his ability to fight this disease from within.

Now we’ve got Alison’s birthday out of the way we can focus our attention towards Christmas; hoping everybody stays fit and well so we are able make the most of that precious family time too. We intend to enjoy these next three weeks as much as possible, knowing as we do that 2011 is going to be a tough year with treatment until at least September, and most probably beyond.