Return of the Tombola ... 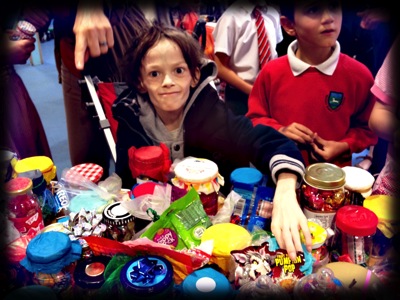 Well, I don't entirely know what to say other than an enormous thank you from the bottom of my heart to all you lovely people who ensured that, as a (very welcome) new addition for 2013, there would be a jar tombola at the junior school's celebration evening.

When I woke Adam up just after 4pm and asked him whether he wanted to go (having changed his mind several times during the course of the day), he said he was too tired and didn't think he would. But it was a rather equivocal no, and so me being me, I gave him a gentle nudge … and he changed his mind again! We agreed a plan; drive up, get there early, spend a couple of quid, make sure he won something, and be home again in half-an-hour …

… or not. We parked his chair in the middle of the stall, and there he remained for the next hour. Studiously examining the jars until he found one (or several) that he liked, then draining the contents of my wallet until he'd picked out enough winning tickets to add them to his collection.

I don't know how many sweets he'll actually eat, though I'd wager not that many. I don't even know how many jars he'll open. We could end up spending longer tomorrow sorting sweets than we did today winning them. Equally they could remain untouched in the bag that we brought them home in.

For two hours today Adam was joining in (well actually he was hogging most of the stall), and having fun. In all likelihood he would have refused to go had he known it was instigated for his benefit.

So thank you friends, know that you did a lovely thing. It's too hard for me to describe what it was like to see Adam go along today and really enjoy himself. I can't lie to you and say my heart was full of joy, how can it ever be? But that's alright, it wasn't about me. I can say that today I have experienced something other than sadness and anger. I was happy for Adam, and I was happy for you all too.

And now I must go and wipe my eyes — I seem to have a touch of hayfever all of a sudden.