Adam and Alison are due to fly home on Monday after a fairly successful week in Grand Rapids. It would have been sooner except for the fact their tickets came with a clause that return within 7 days carried a hefty penalty fare. Not that either or us had studied the Terms & Conditions. Not to worry, a day or two is neither here nor there in the bigger scheme of things.

Scans are predominantly stable. There is one lymph node that is reported as being slightly larger than before; it's not the biggest in absolute terms, that one has remained unchanged. Skeletal disease is stable. There are no new areas of disease. Blood and urine markers remain at the same levels as December, which for the urine is massively elevated. The most pronounced change was in bone marrow results. When we took Adam to Grand Rapids in November near certain that his disease had progressed, confirmation of this was found in his bone marrow - one sample contained 100% neuroblastoma, and the other 80% (samples are taken from the right and left side of back of the hipbone). The results from this week were 30% on both sides. Hopefully, a very good sign. I say 'hopefully' because only taking samples from two sites means it's always possible to get a result that are misrepresentative. However, looking at the pattern over time, and given there was clear improvement on samples from two disparate sites, it appears that something is working.

The upshot of these results is that we are keeping the treatment regimen broadly the same, except for a couple of changes. So far since last April when Adam first experienced widespread progression, we have never quite managed to achieve stable or better in his bone marrow and lymph nodes at the same time. That's the goal with making these changes.

Adam has a bunch of aching limbs again; it started yesterday and has worsened today. We're hoping they're just a result of him being up and about, and a lot more active over the past few days, particularly on Wednesday. In any event they've slowed him right back down today. He's also tired, having not had a full night's sleep since arriving in the Grand Rapids, and then waking this morning at 5am because of his aching legs. He did ask his Mum why he's alright at home, and gets aches as soon as he goes back to America. His powers of recall don't stretch back far enough to remember that he ached the day after getting back home last time, having walked a long way through Detroit airport.

Talking of Detroit airport, a while back I asked on here whether anybody had any connection with Delta, the only carrier that flies direct from London to Detroit. It was a bit of a shot in the dark, but I'm so glad I did it now. They have been tremendously helpful to us. This time round when Alison and Adam arrived at Detroit they were met by two employees who helped transfer them, and all their luggage, right through the airport and on to the shuttle bus to car rental. So a big thank you to Delta Airlines! And a big thank you to whomever first put them in touch with Adam's Appeal!

I must also (again) thank people who raised money for Adam's Appeal, and the NB Alliance for supporting us. Without the support of everybody who donated, collected, bag-packed, baked, walked, ran, hopped (our first fundraiser the bunny-hop at WFIS!), sang, and a multitude of other things besides, we would be in a even more difficult situation right now.

Finally, whilst I'm on this thank you spree, I have to thank Dr Sholler and the team at Helen De Vos for taking Adam into their care, and looking after him. Dr Sholler has an incredible dedication to seeking out, and developing, better treatments for children with neuroblastoma. She undoubtedly has her detractors amongst the wider neuroblastoma medical community; she ruffles feathers. But there isn't anybody else I'd rather have in Adam's corner right now.

Oh, and here's something from the archives … a photo of my kids handing out stickers at that first fundraiser back in March 2010! 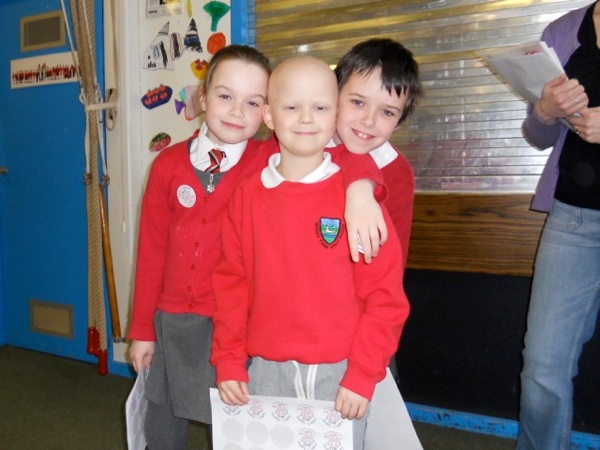