Well The Guardian newspaper caused a bit of a stir amongst the neuroblastoma community over the weekend, running a front-page story on parents fundraising to send their children abroad for treatment. 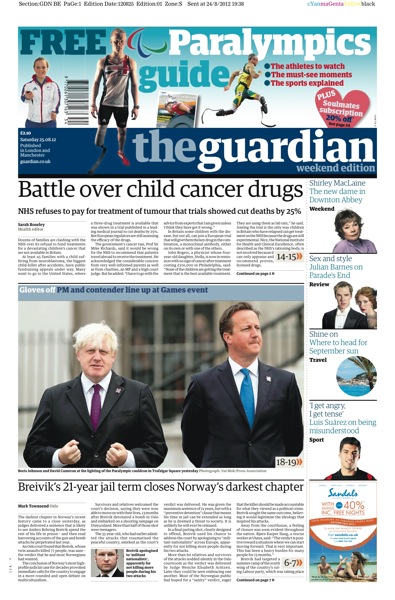 Here are the two articles online; Families raising funds to treat children for cancer abroad and How children's cancer is making parents 'stab in the dark' for treatment.

The comments accompanying the article, and those on social media sites such as twitter were a mix of the usual tripe from people who form an instant opinion about everything and must satisfy their urge to share it with everybody else; and some more considered debate that I myself tried to engage in with certain members of the scientific/medical community, most notably Ben Goldacre. Whilst I can't say that I succeeded in assuaging his mistrust of the article or scepticism of the claims therein, we did, at least for the short while that twitter permits such topics to be topical, and within the confines of 140 characters at a time, hold some kind of civilised discussion and debate.

One of the major themes I took away is that people in the wider medical community see clinical research as necessarily the only way to make advancements, and to establish that new treatments are both efficacious and safe. It would be tough for any right-minded parent to argue otherwise, and I certainly don't see anything in that basic premise that conflicts with the message we are trying to get out there. Some of their comments I myself agreed with. It was pointed out that the two-year follow-up on the US antibody trial published in New England Journal of Medicine (NEJM) was very short. This is absolutely true. I have heard it said by several US oncologists that the difference in outcomes of about 20% looks like it will be sustained, but until updated results are published (5-year data ought to be available about now I think) the question remains. The problem I had (and have), however, is the purist way in which it was being suggested clinical research must be applied. I had comments such as "one single trial is never enough, we must repeat several times in order to verify results" and "so the US trial didn't have the actual UK treatment as one of it's control arms?". Yes we should repeat trials in order to improve the reliability of the results. In a perfect scientific world. Yes we should test each new treatment against the current UK regimen in order to most accurately assess its true impact. And no the US antibody trial did not have the actual UK protocol as it's control arm (though what it did have was a very good surrogate for it) - in a perfect scientific world it would have.

In a perfect scientific world.

But the world is not perfect. Neuroblastoma is a disease that affects 650 children in the US each year, and around 100 in the UK. The high-risk form affects roughly 50% of those, so the total potential patient cohort is small. The US antibody trial, a subject of the Guardian article, accrued only 30 patients a year, and ran for more than 7 years before it had enrolled sufficient patients. Had the randomisation not been closed early due to it meeting predefined criteria in terms a significant difference in outcomes it would still be accruing now. Children would still be dying now because they got randomised to the control arm. That US trial was huge in neuroblastoma terms, widely acknowledged as the most significant advance in treatment in more than a decade. And yet nobody should forget that it took 25 years for research on anti-GD2 monoclonal antibodies in neuroblastoma to demonstrate conclusive survival benefit.

At any given time it's only really possible to conduct one major trial in the US, one in Germany, and one across the rest of Europe (incl. UK) … each of which will themselves take many years to enrol sufficient patient numbers. As evidenced by the HR-NBL-1/SIOPEN protocol, it can be possible to include more than one randomisation to attempt to answer more than one question, but this inevitably adds scientific impurities. Moreover, everybody knows the patient population is not homogeneous where neuroblastoma is concerned, that age and certain biological markers are clear prognostic indicators of response to induction. Yet to date all children have been enrolled on the same protocol trials, though this slowly seems to be changing as more work is done to identify different sub-groups that may benefit from different approaches to upfront therapy. US, German, and SIOPEN induction chemotherapy regimens are all similar, but not the same, so in a perfect scientific world does that mean it would never be possible to infer results from one group to another? And if they operated in silos, and research therefore remained pure and untainted, that would help our children how?

To my mind at least, the idea that research must be perfect is neither a realistic, nor achievable, goal. It never has been where neuroblastoma is concerned, and never will be. Of course it must be rigorous, peer-reviewed and capable of withstanding independent scrutiny and challenge. But the interests of research must never come before the interests of children. Not in the name of science … and not hiding behind the mantra that it's the only way to make proper progress. There are particular challenges in conducting clinical trials in neuroblastoma (as I'm sure there are in other 'rarer' paediatric cancers). But that just means those responsible must get smarter, be more flexible, and in some cases the bar needs to be set slightly less high in scientific terms than it would otherwise be in a perfect world. I dare say even the odd leap of faith wouldn't go amiss. And in my opinion it's that which the people I was engaged in debate with over the weekend didn't quite seem to get. To claim that the results of the US antibody trial cannot be implied into realms of the UK treatment protocol is a purist view that by extension means we cannot make any progress without holding separate randomised clinical trials to answer every single question. True, we cannot answer them with absolute certainty without doing that, without in fact doing that many many times over. But please; this is the real world, these are real children, and far far too many of them are still dying each year …